For all the reasons I adore men, there are also a few things – through extensive experience – characteristically exclusive to the less fair sex, which infuriate me:

Ladies, have you ever hounded a man ferociously after he politely turned you down?

Have you ever told a moody man to, “Smile, love”, when he innocently minded his own business with a resting, anything-less-than-ecstatic face?

Have you ever told a man that he should dress/act/speak/live differently, so that he may give himself a chance to attract a nice woman?

Now, if I ask you how many times this week you have been on the receiving end of this behaviour, I’m sure you’ll have lost count.

But probably above all of these annoying behaviours, the one that makes my blood boil (pun intended) the most, is the majority of males reactions to our menstrual periods.

(Guys, I know that you would prefer not to know all of the gross, gory details, but since the reason you are here on Earth is because your mother had periods, you should and will know: Between the ages of 10 and 15, young women begin bleeding from their vaginas once every 28 days or so for three-five days (on average) at a time. The bleeding usually comes hand in hand with stomach/back cramps, emotional changes and even lethargy. This continues all throughout our lives until we hit menopause between our late thirties to mid fifties. That’s around 40 years of bleeding 12 times a year. I’m not here to give you a science lesson, so if your tiny mind is baffled and you need answers, read here. If you don’t want a baby mama or you want your future wife to love you, you should probably get as clued up as possible.)

Since that glorious day in which I discovered a puddle of brown blood in my Tammy Girl knickers and entered the elite club of official womanhood, I’ve been aware that periods are not something that should be openly discussed – especially around men. I was met with embarrassed stutters when I announced the exciting news in front of my mums early noughties boyfriend. At school, we had to mask toilet visits in front of male classmates or male teachers while hiding tampons up our sleeves and sheepishly pretending we really needed a wee. My Gran used to hush me when I spoke about my still new monthly visitor in front of my Grandad, like the image of his darling little granddaughter bleeding out of her little virgin vagina might send him to an early grave. Even now, in my early twenties, I am so used to men squirming, turning their noses up or openly “Ew”ing and sarcastically saying “thanks for that” at the news of a period, that it’s just easier not to mention it at all.

BUT WHY SHOULDN’T I TALK ABOUT IT? WHY SHOULD I BE EMBARRASSED?

Periods are something bestowed upon every single one of us girls unwillingly. Here’s there thing, guys – WE CAN’T HELP IT. WE DON’T ENJOY IT. IT HURTS. But since we have to deal with them and you don’t, I think the least you can do is to do your best to not make us feel like gross-vagina-bleeding-freaks-of-nature when we talk about it or are suffering with it.

There is a loooong winding history, I’ll guess specifically with a modern social context, of period-shaming; men seeing periods as a weakness and consequently using them against us. There are a lot of people that believe that women cannot be successful leaders of business and countries alike, because we are ‘too emotional’ or ‘too irrational’. We are taught very early on that during our period we are deemed almost disabled, for fear of flooding, collapse or other dramatic outcomes.

And even the more innocent, jovial cases show underlying proof of social period-shaming. I have lost count of times a man has asked me sarcastically if I was on my period when he hasn’t liked my behaviour or attitude, been mad at me, or simply had more emotion than a Barbie doll.

Yes, periods do make us ladies more emotional and erratic at times. Our bodies produce different amounts of hormones at different times during our menstrual cycles. This isn’t just bitchy mood swings, it has it’s own medical term: PMS (premenstrual syndrome) describes the psychological and behavioural symptoms which can (and in my case, always) occur in the time leading up to or during our periods. It’s completely natural and we cannot help it. We might cry over absolutely nothing. We might react to certain situations slightly irrationally and do or say things a bit out of character. We might demand more love (cuddles), attention (hampers of chocolate and cake), or in some cases, complete solidarity. 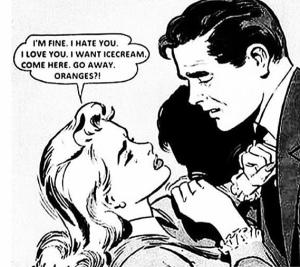 Unsurprisingly, when ignorant people (cough men cough – other woman are far too sympathetic) call this behaviour “crazy”, it only makes us feel like undermined emotional wrecks.

So we bleed. Our emotions get muddled. But most of all, it bloody (haha) hurts. Your male body produces baby making tools with no pain, only pleasure. You have no right to an opinion on something you have and will never experience.

When a man reacts negatively to my period, I now never ever ever feel bad, disgusting or embarrassed. Instead, I feel embarrassed for them; that they are so immature and weak that they can’t handle a period. Why do straight men love vaginas and tits but get freaked out when those same vaginas bleed and those same tits swell and are sore to touch?

If you look at it deeply and psychoanalytically, perhaps it has something to do with the whole Madonna/Whore complex. I feel like our society has drummed the idealistic perpetual child-girl-woman image into the modern males brain, so that the natural growth and development and puberty of women appears disgusting. I don’t know many men that prefer hair over porn star shaven haven, or any men that wouldn’t mind anything more than stubbly legs and underarms. Women have become purely sexual images. Although periods are arguably the most naturally sexual thing in the world (we have periods in order to get pregnant and as mammals we have SEX in order to get pregnant), they apparently interrupt the male gaze for one week out of a month. Therefore men ‘hate them’, or are at least scared of them.

The real men will also buy you tampons and painkillers without much persuasion. Real men will rub your belly and fill up your hot water bottle and suck on your nipples, if that’s what you want. Periods are not gross things. Really, periods are beautiful; reminding us that our bodies are capable of the greatest thing on Earth. (Or, a message from Mother Nature that we successfully got through another month without an unwanted pregnancy – which ever way you chose to look at it) 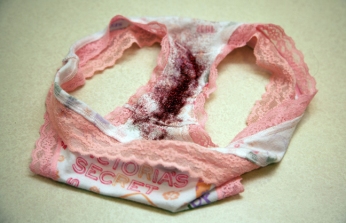 So ladies, be proud of your periods.

Men, carry on the good work, we love you for it.

And Boys… grow up.