My first best friend was called Luke. We met at nursery when we were three or four. Our favourite games were Cops and Robbers, Zoo Animals and Keepers and Barbie and Action Man. It wasn’t weird to me AT ALL that he had a willy and I had a mini. And he was never scared that I had cooties, or at least that he would catch them.

Luke and I were best friends during infant school but must have grown apart once we began junior school. Maybe because that’s around the age that little girls are encouraged to form close relationships with other girls, thus creating a separation between the young sexes. Or perhaps my cooties developed.

Looking back, it’s a relationship that would probably mark my appreciation of being friends with the opposite sex as an adult. I absolutely adore girls and have lots of girlfriends that I admire and have a lot of fun with, but I’ve also had way stronger, way longer lasting, way more meaningful relationships with men. 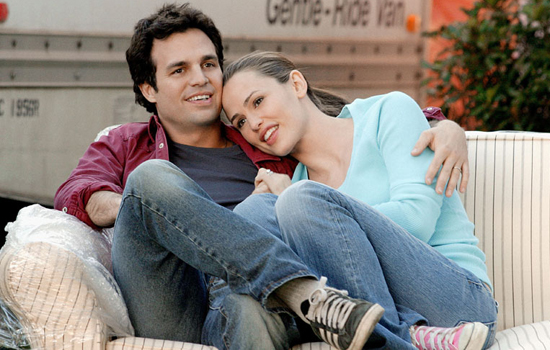 Even in my romantic relationships, there has always been a level of friendship amongst the companionship and romantic or sexual element. Perhaps I simply enjoy the company of men. I feel secure in the brother-sister-like dynamic and in some cases, the more uncle-niece-like dynamic. Even with male acquaintances or those I’ve just met, I feel a lot more comfortable in social situations than I do amongst the same level of females.

And please, I promise this is not the awful “I hate girls”, “girls just don’t like me”, “I find boys so much easier”, “I’m not like other girls” bullshit cliche. To me, those demeaning comments translate as going against your own womanhood, insecurity, or simply surrendering to the sickening ‘cool girl theory’ (Google it). Deep down, what those comments scream to me is, “I want boys to give me attention”. Sorry. 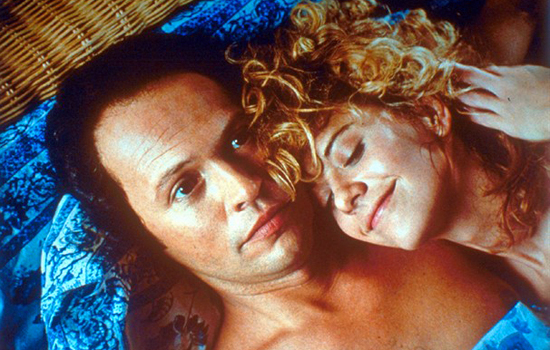 Criticism on this part of my life has been rife for as long as I can remember, and 99% of the time, the criticism comes from other men. The only friendships that didn’t garner any criticism was those with openly gay guys. I honestly didn’t understand the criticism until recent years. Up until the age of 20, I was dumbfounded when outer voices would tell me, “(insert boys name) has a secret agenda”, “(insert boys name) must be gay”, “(insert boys name) wants to fuck you.” Mainly because the statements are ignorant, and also because I’m not that stupid. I’d reply with noooooo, honestly, we don’t fancy each other, we’re just friends! The critics in question would give me a sarcastic thumbs up with their eyes. 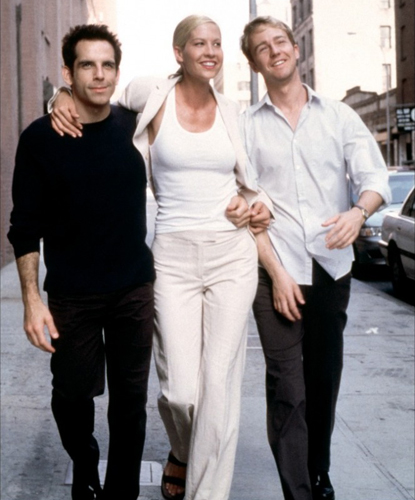 I can see why. In films and television it’s cliche for male and female friends to fall in love and get together and live happily ever after. My favourite is He’s Just Not That Into You’s “You are my exception” scene.  There are also countless songs written in the voice of a guy that is secretly in love with a friend or his friends girlfriend. It’s almost like friendship should be rewarded with romantic love. No fictional man is happy ending up as “Just Friends”. 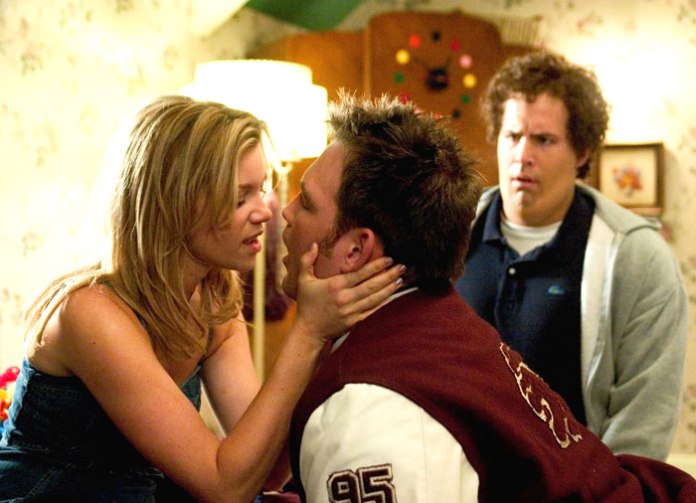 The majority of women have at least one or a few male friends, and most would say, “OF COURSE you can be friends with the opposite sex”, probably with similar explanations than the one I gave above. But I have to admit, it does make me wonder. How could so many men be wrong? And surely, being honest men – too honest a lot of the time  – could they know their own sex much better than I ever could? Do they know some enlightened secret that us with vaginas don’t?

I mean, biologically, (straight) men and (straight) women are inwardly programmed to mate (I add brackets because the of course subconsciously the dynamic changes with gay or lesbian friendships). So is it possible to have non family male/female platonic friendships? 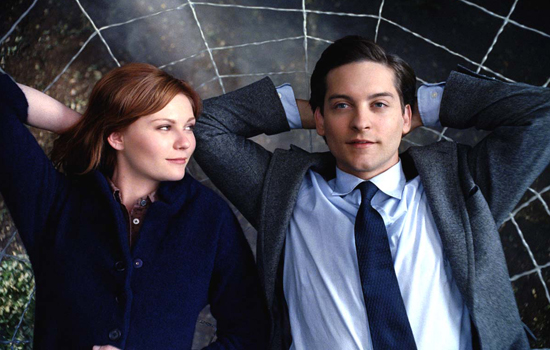 Giving my word that they will never be outed with their brutal honesty, I asked some best friends, family members and acquaintances – the youngest being 25 and the oldest being 70 – and only men I (maybe naively) am certain would have no reason to lie to me – the old age question: Can men and women ever really be just friends? 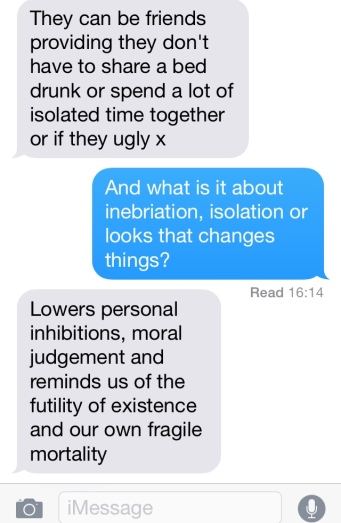 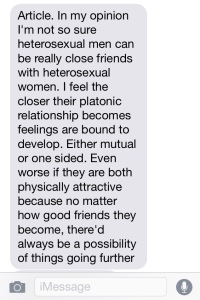 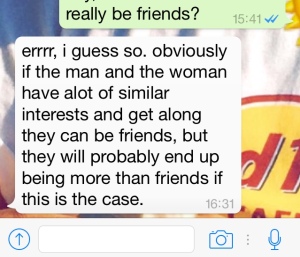 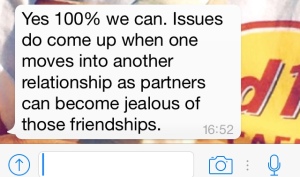 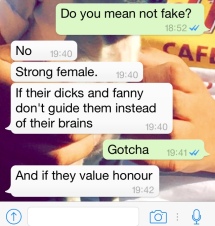 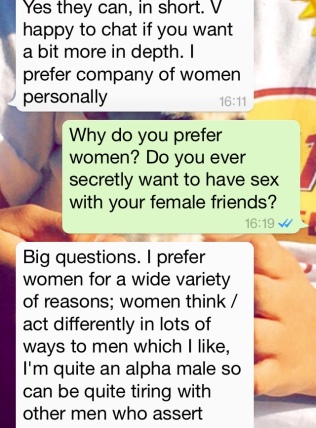 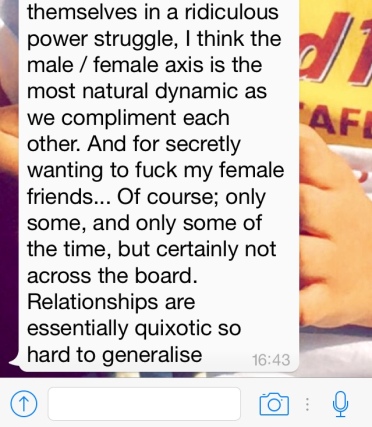 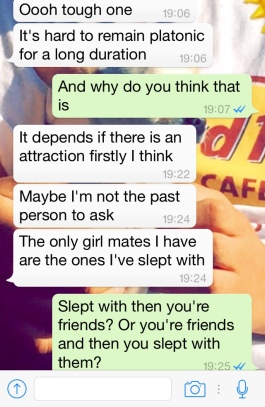 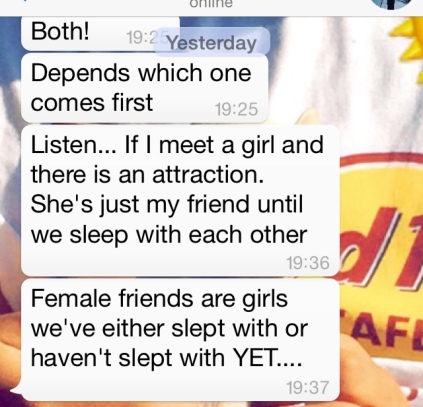 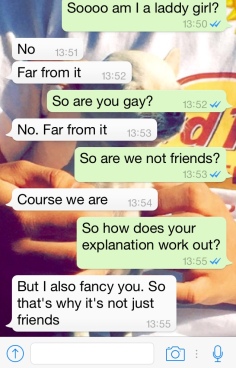 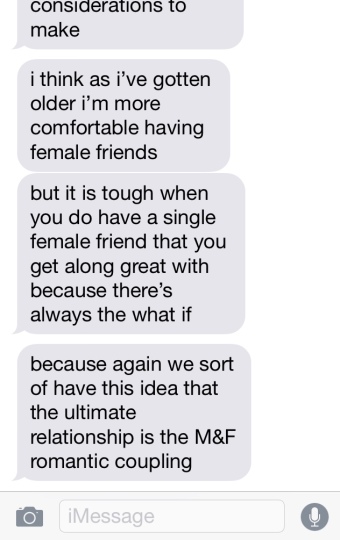 To be honest, I feel that the last entry concludes perfectly and sums up every entry in the most rational, eloquent way. This exercise has given me a new light as to how men truly feel. I think there are a few situations where the equation of men + women = friends could be so simple that it could be successful;

It’s definitely made me sit back and question just how ‘friendly’ some of my male friends are. As long as the female’s intentions are clear and there is no cock-teasing, who says you can’t be friends with a guy that gently, subtly fancies you? I kinda fancy a few of my friends (I do have eyes) without being attracted to them. And I really can’t see a When Harry Met Sally situation arising out of any of my present friendships. I have never really fancied someone I’m friends with, or even casually slept with a friend. But again, I think this is where males and females differ: I think females know straight away whether they want to sleep with someone, and act specifically to that feeling. But men, being from Mars and all that, sometimes don’t separate their ‘friend’ actions from their ‘I want to be deep inside you’ actions.

But, who knows, perhaps there are exceptions to the rule.

Whatever the answer, all we can do is be aware of the differences between the sexes and be aware of their feelings and intentions. That doesn’t mean we can’t enjoy their company, as long as everyone in the equation is a respectable, decent human being.

(All images taken from POPSUGAR and my own phone/family album)